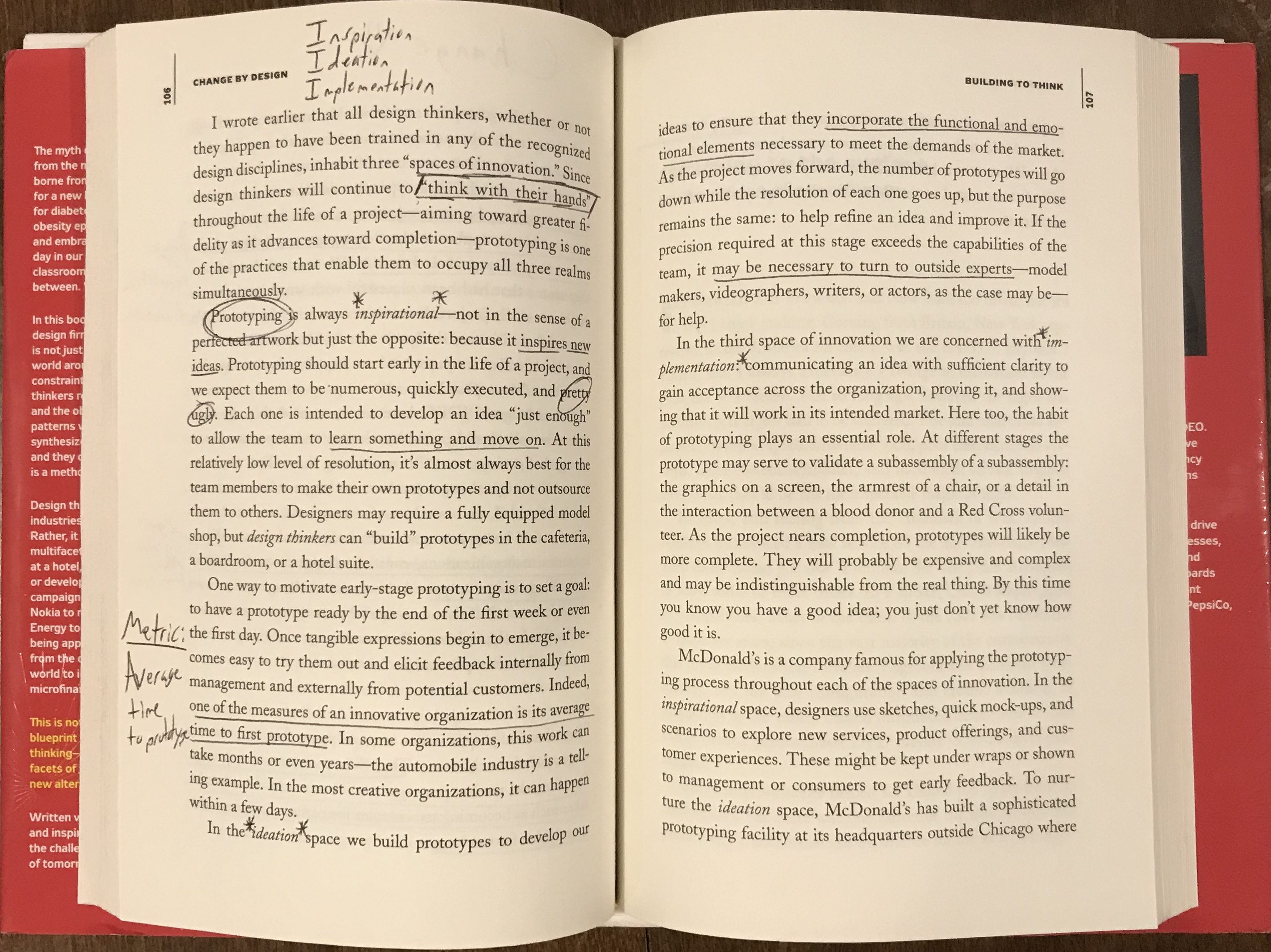 It’s at your fingertips. If I had to sum up Change by Design in one phrase, that would be it. Just like a “How Might We” statement can be broken down into its various components, let me break down this phrase into smaller parts to quickly explain Tim Brown’s book.

First is the word “it’s.” This contraction is both an abbreviation and a combination of two thoughts. Tim Brown, in his writing of the book, continues to come back to a common theme of design centered around the combination of people and ideas. For instance, he argues that design is a combination of individuals with various skillsets sharing their unique perspectives. In another chapter, a combination of ideas come together to build upon each other and blossom into one great idea. Yet again, he even speaks to the combination of methodologies – lean, agile, and design thinking in particular – to discuss that their methods all have shared principles of a customer focus and continuous experimentation.

Design thinking is neither art nor science nor religion. It is the capacity, ultimately, for integrative thinking.
-Tim Brown

Abbreviation also shows up frequently, and not in a cost-cutting manner. Rather, abbreviation drives creative constraints that can actually fuel innovation. Given business, cultural, economic, or other constraints, a design thinker must work within their abilities, time, and budget to pursue a solution that addresses the user need.

The next word – “at” – is all about location. Throughout the book, Tim argues a recently unpopular belief that co-creation works best within co-location. Since “there’s no substitute for direct observation” research is done as close to the challenge as possible and always right alongside the people that it affects. Being at the location helps designers to build context,  understanding, and emotional relationships that would otherwise be missed from more traditional strategy execution.

Towards the end of the phrase is the word “your.” This word is an imperative that the responsibility to innovate lies within you. An organization that is built to silo innovation or only have a select few partake in these actions is unlikely to succeed. Instead the book urges everyone to participate in innovation whether it be incremental or transformational. Experts are overrated (though occasionally called for) and the people with diverse backgrounds are the teams which come together to create the best change.

Finally, I mention fingertips because they are the parts of your body that create. Tim says in various ways that one of the best metrics of an innovative team is their time to first prototype. With a propensity towards action, teams should always be building to experiment, learn, and birth new ideas. Perfection from the start is a fallacy of the recent past. It’s time to learn by doing, as many of the great creatives from Frank Lloyd Wright to Thomas Edison and Leonardo DiVinci have done before us.

A nimble team of design thinkers will have been prototyping from day one and self-correcting along the way. As we say at IDEO, “Fail early to succeed sooner.”
-Tim Brown

In all, I enjoyed Tim Brown’s book on design and can see how it has become a staple of design thinkers from novices through experts. It inspired me to increase my pace of discovery and allow developers I work with to code at early stages – in order to learn and not to launch.

Tim has many great stories and anecdotes throughout which make for a great light read. But don’t mistake ‘light’ for easy because even though his concepts are intuitive, enacting them in organizations large and small can be quite the challenge. This challenge is not one that we back down from as Tim ultimately attempts to make the case for building a culture of innovation in organizations of all sizes, but ultimately to light the fire inside of each one of us. After all, innovation is at our fingertips.